An Inside Look: Beyond Belief preparations for opening night - June 22 - New York City 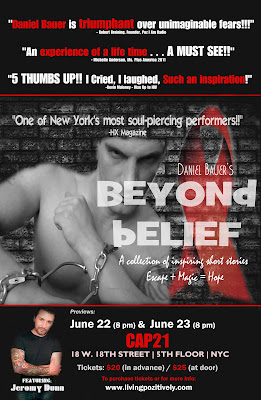 These past few weeks I have received a lot of emails and private Facebook/Twitter messages with some pretty cool questions from folks asking for additional inside-look details about my new show Beyond Belief; so I thought I would take this moment to answer some of those questions. Here goes . . .

Why the name Beyond Belief?
Ever since I was a kid I was always fascinated (ya know the mouth-opened really wide kind of fascinated) by magic. Especially when the magic was done up close - like right in front of my eyes! Now combine my true love of life for magic and escape with all the blood, sweat and tears I endured to become the successor to Harry Houdini, touring the world - my dreams all coming true!! AND THEN. . . losing everything in the blink of an eye because I shockingly learned I am HIV positive which then became the "silent-reason" for a sponsor to back out of a commitment - I became a liability. Wanting nothing more than to die and everything in between and after. . . the only two words I knew that could sum all of this up are "Beyond Belief."

What makes Beyond Belief unique in the fight against HIV/AIDS?
I believe (don't quote me on this. . . ha!) I am the only openly gay, HIV positive escape artist and magician. There are some incredible warriors out there doing their thing. . . Jamar Rogers, Robert Breining, Dab Garner, Jeromy Dunn and Sean Strub to name a few. . . all whom I utterly look up to! How I differ. . . well we all have the same drive and passion to combat stigma, fight criminalisation, comfort newly diagnosed, and help drive the forces to finding a cure / vaccine. The more stories of success that go public for all to witness the better the world heals in our common fight! My difference is I am challenging my own physical and mental capabilities and putting it all out there with Beyond Belief.  This is just the start. . . it is my unique way of telling ALL of my story and how I have been able to pull through the depths of hell to realize my life is sooooo worth fighting for. Oh yeah, and I don't think any of the warriors I mentioned get tied up and throw themselves in water tanks while in straight jackets! he-he!  I think that's pretty unique!

What can people expect if they attend Beyond Belief?
Well anyone who buys tickets to attend the show can expect to be inspired (I hope) with stories of loss, survival and triumph about my life and those around me living with HIV/AIDS as I share a collection of short stories about overcoming some intense moments in life from laying eyes on my very first magic kit to nearly ending my life through addiction, suicide attempts and finally what it took to get where I am today. I am a 10 year warrior of HIV. . . trying to wrap up 39 years of life in a 90 minute experience! ha! It's gonna be a whirl wind of an emotional roller coaster all creatively weaved through the arts of magic and escape!

Is this a "Las Vegas" type magic act?
Nope! Beyond Belief is about the story, while I can assure you the magic I perform is pretty sick and there is one escape I will perform where death could be the outcome. . . there will be no smoke, no mirrors and no silly theatrical mechanics to wow ticket holders! The magic is real! And so are the escapes! The cool thing is I will engage the audience 150% throughout the show! "Two director's chairs, an old magic trunk and pure darn brilliant magic and escape. . .  now that's real Houdini stuff!" (-me)

What are your plans after Beyond-Belief?
This show is just the start of what is to come. I am currently training to attempt Piranha Peril, the death-defying escape I was training for and going to debut 10 years ago. . . until 'they' labeled me a liability! Kind of ironic that I am going back into a pool of 'piranha' - but this time I [my dreams] will make it out alive and not be eaten up!. Ultimately I want to show everyone / anyone living with HIV that with the right diet, adherence and lifestyle you can . . . you will live a long and healthy life. Every year I hope to attempt a brand new totally original escape. .  marking another year of success where I have escaped the stigma (and assumed physical limits) of  living with HIV. Nothing is going to stop me this time - certainly not my HIV nor the the fear others still may have about HIV.

Will Beyond Belief appear anywhere else outside NYC?
My hope is that this show will run for sometime here in NYC. However I am thrilled that Beyond Belief is already slated as a marquee event at the International AIDS Conference - specifically for the AIDS 2012 REUNION program. Additionally, Beyond Belief will be touring to benefit other organizations. For example this August, Beyond Belief is heading to Jacksonville, FL for one night to benefit DAB the AIDS Bear Project!

Well, I think those are all the questions that came in. . . if anyone else has anymore questions about Beyond Belief, feel free to leave a comment here and I will happily reply!

I hope anyone living in the NYC area will come out to experience Beyond Belief! Together we will make a difference.

Thank you for following my blog! I am Daniel and I am livingpozitively.


Posted by LivingPozitively at 12:56 PM